Like seismographs translating everything from the littlest murmurs to the biggest tremors into audible form, the six members of Ensemble SuperMusique are exceptional soloists and masters of improvised music. They are appreciated for the uniqueness of their interplay and for the significant influence they’ve had on the evolution of musical language. For this concert, Ensemble SuperMusique presents a highly varied program based on improvisational games, verbal instructions, graphic scores, and more. The house will be rocked!

Instruments of Happiness: The electric guitar is the most dramatic, colourful, soulful, expressive instrument of the 20th century. So what could be better than a single, virtuoso solo electric guitar? Four guitars, of course – inhabiting a new, unexplored world of sting-bending timbres, amplified sounds, exotic noises, creative ideas, sonic architecture, adventurous harmony and luscious melodic gestures. The electric guitar quartet, chamber music for the 21st century. The concert at Suoni Per Il Popolo features three very different new works for the quartet. Antonine Berthiaume’s Fungi is a rhythmic tour de force, while Rainer Weins’ What is Time? features the other worldly sounds and unusual beauty of the prepared guitar. The concert finishes with a major new work by Brady – his four-movement The Same River Twice: Symphony #5.0 – a 30-minute piece which moves from punchy minimalist textures to haunting soundscapes, performed with energy and precision by some of Montréal’s top guitarists. 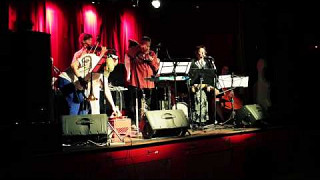